skip to main | skip to sidebar

Ricketts Family Improves Clubhouse and Toilets
CHICAGO, Ill. - Yes folks, the Chicago Cubs off-season moves have indeed seemed to make sense so far in this young season. The Cubs (5-7) continue to make mistakes that high-school ballclubs typically do not. The Cubs are well on their way to being flushed right down the division race toilet.

The Cubs continue to be the laughing stock, while the Cardinals have become one of the dynasty teams in the National League. The Cubs improved their restroom facilities, and Cardinals scored Felipe Lopez from the bargain bin late in the offseason. This dude put up a career year last year, hitting .310 between Arizona and Milwaukee. Oh yeah, don't forget they also re-signed Matt Holliday for seven more years at $120 million.

The Cubs core players continue to age just like the old troughs did at Wrigley Field.

Alfonso Soriano has been having knee problems, but he'd better use all the money he's raking in from his eight-year contract to go find the doctor from The Six Million Dollar Man and build him some new ones.

Who knows—it's possible that Soriano goes down with injury this year, and it could be the best thing that ever happened to this club. Not likely though.

I regret asking this question.

Hmmm, so lets see, where do you see improvement? Well for one, Jeff Baker shouldn't be an everyday starting second-baseman. The Cubs have thrived on mediocrity at second base since the retirement of Ryne Sandberg. 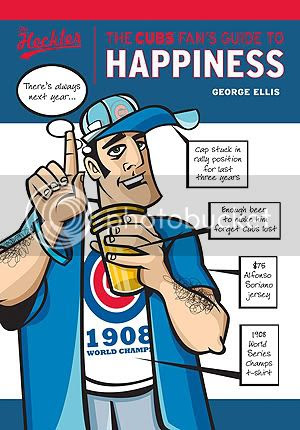 Third-base was even a bigger joke prior to Aramis Ramirez joining the club. Between Ronnie's last season and the beginning of the Aramis Ramirez Era, the Cubs went through 98 third basemen before finding one that didn't suck.

So sit back and take a look folks, is there really a single player on this team that potentialy could be an all-star? Perhaps. If Aramis Ramirez can stay injury-free he might have a shot. Aside from that we don't have a single all-star caliber player. Guys that could come out of the woodwork include Randy Wells and Marlon Byrd, both guys that the northside of Chicago could soon come to adore. We lauded Mark DeRosa, now it's time to jump on the bandwagon of these two. Honestly, they're the only bright spot we have right now.

Bring your $50 to spend on overpriced beer at the ballgame, we're gonna need every sip of Old-Style to watch this over-priced team.

Posted by Kevin Kunde (BAKER SID) at 6:38 PM No comments:

Why Northern Iowa will go down as KU's worst loss ever
Lawrence, Kan. - Two years removed from a national championship, Kansas has somehow managed to bring back the torturing past with yet another NCAA tournament collapse in its second-round loss to Northern Iowa.

The Jayhawks have now lost three times as a No. 1 seed in the second-round of the NCAA tournament, more than any other program in America.

A bold and probably even ill-advised late three pointer from Ali Farokhmanesh as time was winding down made the Northern Iowa guard an instant celebrity.

Kansas was the national title favorite for almost a full calendar year after losing to Michigan State in the 2009 NCAA tournament. Sherron Collins and Cole Aldrich opted to return to school, and the Jayhawks inked top-ranked high school recruit Xavier Henry. All of whom will most likely head for the NBA after this season.

Just one week ago the brackets were released. Now, the Jayhawks can sit back and watch the madness as they must wait until Oct. 15, 2010 at Late Night in the Phog before they can hold an official practice. Were they overconfident? Simple answer: No. Was Northern Iowa confident? Yes. In a game that saw KU lead for a mere 56 seconds at 2-0, the Jayhawks were the ones trailing two minutes later 10-2. Who wouldn't have confidence? No mid-major will ever fear Kansas from this day forward. Sure people will moan and groan about how the Midwest Region was the toughest of the entire 64 team field, but look at how things have shaped up. Northern Iowa will move on to face a banged up Michigan State team that is without its leader Kalin Lucas. How sweet would it have been for the Jayhawks to exact some revenge on the squad that bounced them from the 2009 NCAA tournament. "We play that team 100 times and 99 times we beat them," stated sophomore Marcus Morris. I couldn't disagree more. Perhaps if Kansas would ever leave the friendly confines of Allen Fieldhouse before the month of December and face-off against some non- conference mid-majors, the players could back that statement up. However, that will never happen. An athletics department that has become more concerned with big business has failed to realize one thing: the true fans are being excluded. Kansas Athletics corporation would rather have pencil pushing CEO's sitting front row at the PHOG in their shirt and ties with their Aquafina bottled water. So here is a message for you Mr. Larry Keating, get us out to New York, lets play in the preseason NIT against some of the so called top-ranked competition in America, rather than inviting guarantee teams into Allen Fieldhouse to make some money.

As a diehard KU fan, this has now gone from most exciting, to the most dreadful time of year. Watching other teams bask in the NCAA tournament glory makes me sick to my stomach, and if Kentucky moves on to win the NCAA title I might just puke. As KU fans we can sit back and speculate all of the what if's and what could've been's. But, the bottom line is this winners move on, while losers sit on the couch.

Go ahead Jayhawk nation move on. Let's begin thinking about the 2011 Final Four in Houston, Texas.

Ranking KU's worst losses
1. Northern Iowa- 2010
2. Arizona- 1997 Thanks to a core of Jacque Vaughn, Raef LaFrentz, Paul Pierce and Scot Pollard, the Jayhawks arrived at the Birmingham Regional as such overwhelming favorites to win the national title that an Alabama newspaper ran the headline "Kansas and the other guys." A fourth-seeded Arizona team that finished fifth in a loaded Pac-10 that season denied Kansas its place among history's best, holding off a late Jayhawks rally to pull the upset that introduced the world to Mike Bibby and Miles Simon.
3. Rhode Island- 1998 Determined to redeem themselves after the stunner against Arizona the previous year, Paul Pierce and Raef LaFrentz led Kansas to a No. 2 ranking and another No. 1 seed in the NCAA tournament. Eighth-seeded Rhode Island's Cuttino Mobley and Tyson Wheeler wrecked the Jayhawks' quest to win Roy Williams his first championship, carving up the Kansas defense off the dribble en route to a huge upset.

4. Bucknell- 2005 As crushing as this loss was for a Kansas team that thought it deserved better than a No. 3 seed after finishing the season No. 1 in the RPI, it was even more astonishing because of the opponent who beat the Jayhawks. Bucknell became the first Patriot League team to ever win an NCAA tournament game and won the NCAA tourney game in the 110-year history of the school's basketball program.
5. UTEP- 1992 Eighth-seeded UTEP conjured memories of the Texas-Western team that shocked Kentucky in the national title game in 1966, spreading the floor, burning up clock looking for a good shot and springing the upset. Top-seeded Kansas lacked the talent it would have later in the decade, but the Jayhawks were good enough to go 27-5 that season a year after losing in the national title game.

Morris twins will be key to victory, not Aldrich

Lawrence, Kan. - When the Kansas Jayhawks take the court Saturday afternoon, KU will face one of its most formidable big men in recent history.

Northern Iowa center Jordan Eglseder has studied every Kansas move, especially those of fellow center Cole Aldrich. Think about it, how many times were the Jayhawks on national television this season? 24 games? How about Northen Iowa? Two, maybe three?

Teams sit back and dream of knocking off top-ranked Kansas all-season long. Well, today Northen Iowa gets its chance.

Marcus Morris is coming off a career-high 26 points and 10 rebounds in an NCAA Tournament first-round victory against Lehigh University.

Markieff, an inch taller, a much better outside shooter, and more highly touted coming out of high school will need to contribute on Saturday for the Jayhawks to defeat Northern Iowa.

With the twin towers in the game, you combine quickness, shot blocking, athleticism, and soft touch from within the perimeter.

“Having somebody you played with your whole life on the court with you, telling you how everything is, never sugar-coating it, it’s good,” Marcus said. “We’ve always had each other, so if he’s doing something wrong I’ll tell him, and if I’m doing something wrong, he’ll tell me. We’re so close that we keep each other in check and tell each other what we could do better.”

Kansas will need to find its killer attitude from 2008 starting today. The defining characteristic of Kansas' 2008 national championship team was its killer instinct, the joy it took in stepping on an opponent and never letting it up.

This seasons Jayhawks play a blue-collar game, grinding out the pace for 30 minutes, then exploding for 10 minutes to win a game in double-digits.

If the 2010 Jayhawks can find a way to play blue-collar basketball and develop the killer instinct the 2008 squad relished, there will be no stopping the Jayhawks on their path to St. Louis and Indianapolis.